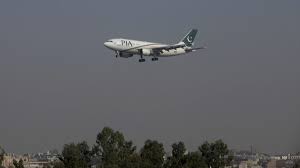 To aid overseas Pakistanis who have sustained most during the COVID-19 epidemic, Prime Minister Imran Khan announced that the government is opening airspace for international flights.

The decision had been taken in a federal cabinet meeting, chaired by PM Imran Khan in Islamabad. He tweeted, ‘we will partially open airspace for global flights’.

He also added, ‘We welcome you back home and our government will facilitate you in every way. This is being done especially to help our abroad workers who have endured most in this epidemic but have shown great bravery and made us proud.’

Worldwide flight operation from all airports of the country resumed on full-scale, announced by the Government of Pakistan. NOTAM says that all international travelers and leased flights will be approved to run to and from all airports except Gwadar and Turbat.

Civil Aviation Authority (CAA) notified that the latest decision will come into effect from Friday night. In order to ensure adequate separation between arrival and departures of the travelers, the aviation authority will authorize the plan of the flights.

These safety measures come under health protocols adopted to contain the spread of COVID-19 pandemic. The orders will apply on all cargo, special, and diplomatic flights. Whereas, it will need exceptional approval from the higher authorities.

After closing its airspace to commercial flights, Prime Minister Imran Khan has given a green signal to resume the overseas flights. The procedure will be continued under the SOP’s devised by the concerned authorities.

According to sources, the unemployed workers and laborers will be deported first. The PTI government is ready to provide every possible support to unaccompanied nationals.

The Re-opening of International Flights

PIA had brought back 56,846 stranded Pakistanis through 285 flights from more than 60 countries over the past four months. Reported by Minister of Aviation.

Some countries are also on high alert, passengers will undergo health screening. Before being taken to a hotel for 14-day quarantine in a room provided by the country. The families of the travelers are urged not to come to the airport for greeting.

The government realizes the difficulty being faced by Pakistanis abroad and will not leave them alone in these challenging times, says PM.

PM also announced that the disinfection of aircraft will be ensured and no over-crowding at airports will be permitted. The crew of a foreign airliner landing in Pakistan would not be allowed to set down from the plane.

The motion by the government came about after PIA flight PK-8303 crashed in the populated Model Colony, Karachi. It left 97 people dead and two survivors.

The PCAA has also directed to rigorously follow the plan issued by the authority.