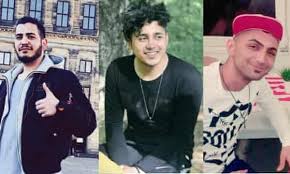 Amirhossein Moradi, Mohammad Rajabi and Saeed Tamjidi are said to be in their early 20’s. The youngsters were arrested during an anti-government protest last year and sentenced to death.

After one whole year, the Supreme Court of Iran has re-visited the decision and put a hold on it.

The Decision of a Re-Trial

According to Babak Pakina, lawyers of one of the arrested protester said their plea for a re-trail has been accepted by the Supreme Court.

After millions of Iranians used hashtags to support the youngsters, did the court take up the case once again.

In year 2019, Amirhossein Moradi, Mohammad Rajabi and Saeed Tamjidi were a part of protest along millions of other against the government.

Their motive was to stand united against the unfair increase in the petrol prices. Thus, at the end of the protest, these three were arrested along with hundreds of others.

As per the UN experts, the lads were sentenced under an “unfair trial” who confessed to crime under police torture only.

These guys were sentenced to death earlier this year. After the use of hashtag “#do_not_execute” by the locals hundreds of times, the Supreme Court was forced to uphold the decision earlier this week.

Apart from China, Iran stands on top of the list to execute hundreds of criminals every year. Even in times when the world is dealing with the deadly pandemic, Iran continues to execute those found guilty.

According to BBC Persian Jiyar Gol reports, many Iranian Human Activists believe the execution to be wrong. The government uses it a way to scare off people from streets, suppressing voices against them.

Many celebrities came forward in support of the movement started to stop the unfair execution of the youngsters.

Also, the lawyers of all three were called to review court papers and evidence against their clients.

Earlier this Tuesday, two Kurdish men, Diaku Rasoulzadeh and Saber Sheikh Abdollah were executed. They were sentenced to death back in 2015. The two were held responsible for planting bomb at a military parade in Mahabad.

What the pandemic couldn’t do was done by millions of Iranian who untied to save the three young lads from an unfair trial.

The Supreme Court still hasn’t finalized the decision but promised to re-open the case in support of the re-trial plea.