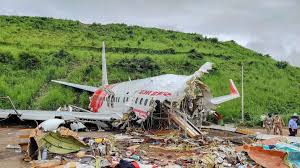 India has not reported a plane crash over the past decade, until the fateful day of 7th August.

Air India had boarded 190 passengers along with the cabin crew and pilots. However, fortunately or unfortunately, only 18 people lost their lives while others were injured.

The plain boarded passengers from Dubai and was supposed to land safely in Kozhikode, district Kerala safely. But little did the people know, including the pilots that it was the last plane journey for them.

Upon reaching India’s state Kerala, the pilots were informed of the bad weather. However, they tried their best to make the landing secure.

According to reports, Kozhikode had been flooded with water, and was still under thunderstorm when the flight approached. It is said that the airport of Calicut now known as Kozhikode) has one of the most difficult runways for landing.

Because of the thunderstorm, the pilots were unable to land on their promised runway. The blurry vision added to their misery and they radioed the control tower to give them runway 10 for landing.

Kozhikode’s runway 10 is considered to be dangerous as its sit between a hill and ends at with a slope. A minute late you’re in landing and it will result in crash.

This is what exactly happened with the Air India!

Even after multiple warnings from the control tower, the Air India’s pilot thought they had no other way to land. They made a round twice around the airport and then tried landing on runway 10.

The air pressure was so strong behind the tail that it kept pushing the craft forward. The pilots landed later than they were supposed to. A few minutes delay in their decision and the plane crashed.

The craft broke into two pieces, killing 18 on board including the pilots while injuring others.

As per the reports, the airplane has been completely destroyed but it was fortunate that they were not many casualties reported.

Also the reports indicate that Air India is liable to pay money to every passenger’s family who lost their life, but of course money won’t bring them back!