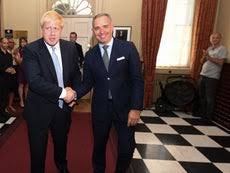 It has been informed that a former right-hand man to Prince William has been elected by Boris Johnson to head the civil service and force through Dominic Cummings’ hard rain transformations of Whitehall.

According to the Financial Times, Simon Case, who was made a long-lasting personal assistant at 10 Downing Street earlier this year, will be named as the cabinet secretary on Tuesday.

The previous private administrator to both David Cameron and Theresa May was stolen from Kensington Palace in May by the man he is now set to restore, Sir Mark Sedwill, to supervise Downing Street’s handling of the COVID-19 catastrophe.

Downing Street’s statement in June that Sedwill would step down in September both as Whitehall’s topmost civil servant and the PM’s national security consultant was widely seen as part of a revolution driven by Cummings to substitute long-serving bureaucrats with Johnson supporters as he pursued to centralize power in the prime minister’s office.

Since 1916, at 41, Mr. Case will be the youngest inhabitant of the cabinet secretary’s role, typically the peak of a long career in Whitehall departments.

During a two-year spell as a private administrator to William when the tense affairs between the second in line to the command and his brother Harry and sister-in-law Meghan were propelled into the media spotlight, he was praised with upgrading the functions of the Duke and Duchess of Cambridge.

Later employed as a private secretary to Cameron from 2012 to 2014, Case spent a year as director of policy for the government’s secret eavesdropping center GCHQ before resuming to 10 Downing Street as the PM’s principal private secretary in the wake of the death of Chris Martin.

Before taking up a position as director-general of the UK/EU Partnership in 2017, he stayed on at No 10 for 18 months under Ms. May. Born in Bristol, Case studied antiquity at Cambridge and took a Ph.D. from Queen Mary University of London, enrolling in the civil service in 2006 as a policy adviser in the Ministry of Defence.

He later on relocated to the Northern Ireland Office and Cabinet Office, where he operated as head of the Olympic Secretariat directing the distribution of the 2012 London Games.

After the summer break on Tuesday, Mr. Johnson is anticipated to verify the nomination at the first meeting of the cabinet before a formal pronouncement later in the day.

A Cabinet Office spokesman stated, ‘An executive pronouncement on the new Cabinet Administrator will be made on Tuesday 1st September.’

Ever since Mr. Johnson’s voting victory in December, along with the top officers in the Foreign Office, Home Office, Ministry of Justice, and Department for Education, Sir Mark Sedwill is one of five heads of Whitehall departments to leave surprisingly prematurely.